What Is Digital Payday About?
Digital Payday is a program which claims to help people make passive income, to be exact it promises that you can make $5,000 in just 24 hours.

What Is Digital Payday About?

Digital Payday is a program which claims to help people make passive income, to be exact it promises that you can make $5,000 in just 24 hours.

It claims to use some methods which companies like Google and Facebook have been using for years without getting noticed and right before our eyes. The system is owned by Daniel Bluth and he pretends to know some secrets about how this companies are making money and how to put them to use.

Facebook makes most of its money through advertising and this is something which Mark Zuckerberg has admitted. But what does this have to do with Digital Payday?

I have some reservations about this program which make me think that it can be a scam.

In the sales videos Danial claims that if you join Digital Payday you will have the possibility to make a lot of money, but he doesn’t explain exactly how you are going to make so much money without doing anything.

How Does Digital Payday Work?

Danial says in the sales video that people who join the system don’t need to have any specific skill to start making money with it. All you have to do is post some ads. There is no explanation on where the ads are going to be posted. Is it on Facebook? Or Google?

I have no idea because this detail is not explained on their sales material. But I know that regardless on where you are going to post the ads, you need to pay for them. But Daniel claims that anyone can get started with no cost. In fact, this doesn’t make sense. Things don’t work how he is explaining them.

Here is Daniel Bluth on the Digital Payday website: 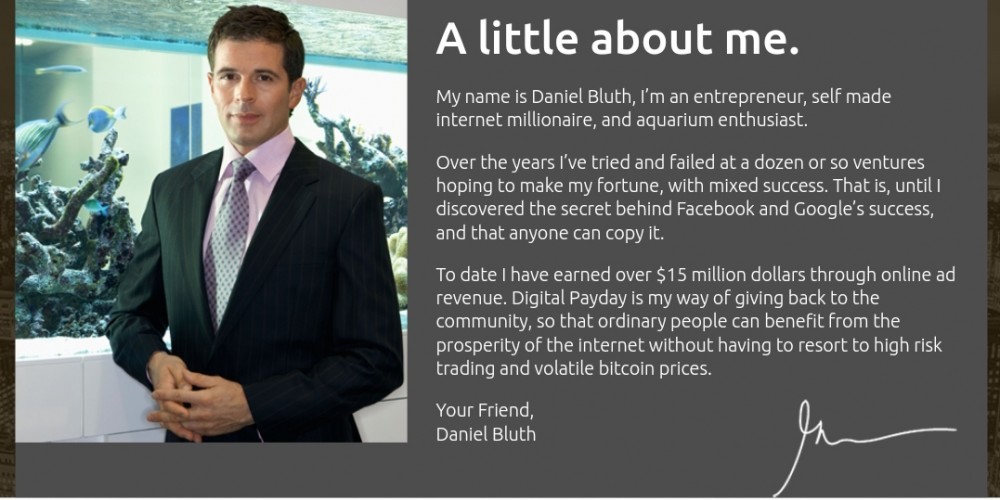 And here is proof that he is just a stock photo: 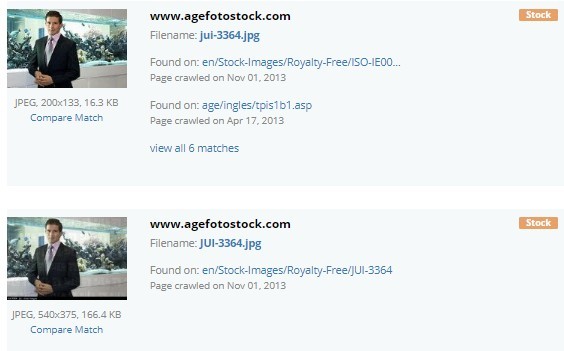 In my opinion, there is no doubt that Digital Payday is a scam. There simply is no proof that the system works and once you are going to pay for ad space you will not receive anything back because your money are going to them.  Now that we know that the narrator in the video is just a paid actor it is easier to conclude that it is fake.

On the sales video there are also some testimonials and they of course are paid actors too. Here’s the proof:

The above woman is just a paid actress from Fiverr: 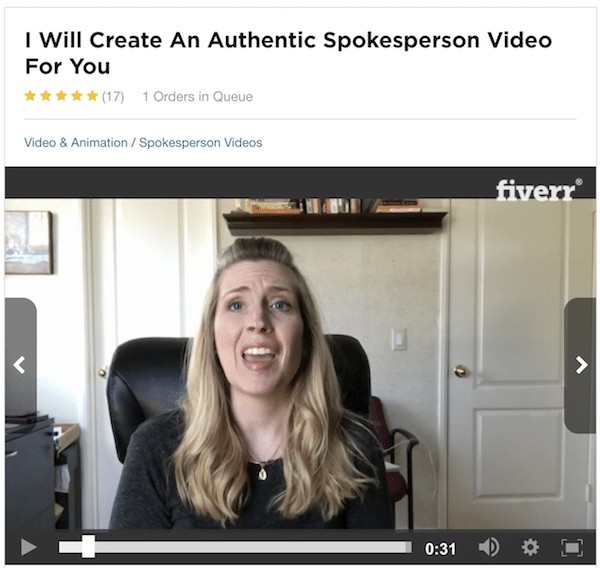 On the video you will also see a footage of Mark Zuckerberg saying that most of the Facebook’s revenue comes from paid ads, but nowhere he mentioned Digital Payday of how it can make money for people who are interested in making a passive income. 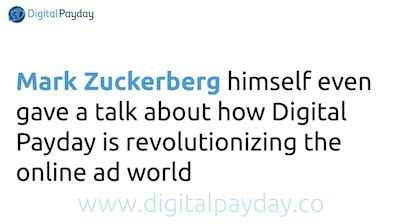 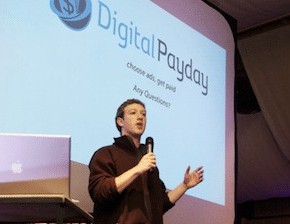 What? They make it seem like Mark Zuckerberg endorses the program? It’s so fake and they have really gone too far with this. I mean using the name of a famous person. I don’t understand much of legal issues, but maybe he can even open a case against them.

This is a photo which existed long before this program existed and they literally have photoshoped the Digital Payday logo on his presentation. 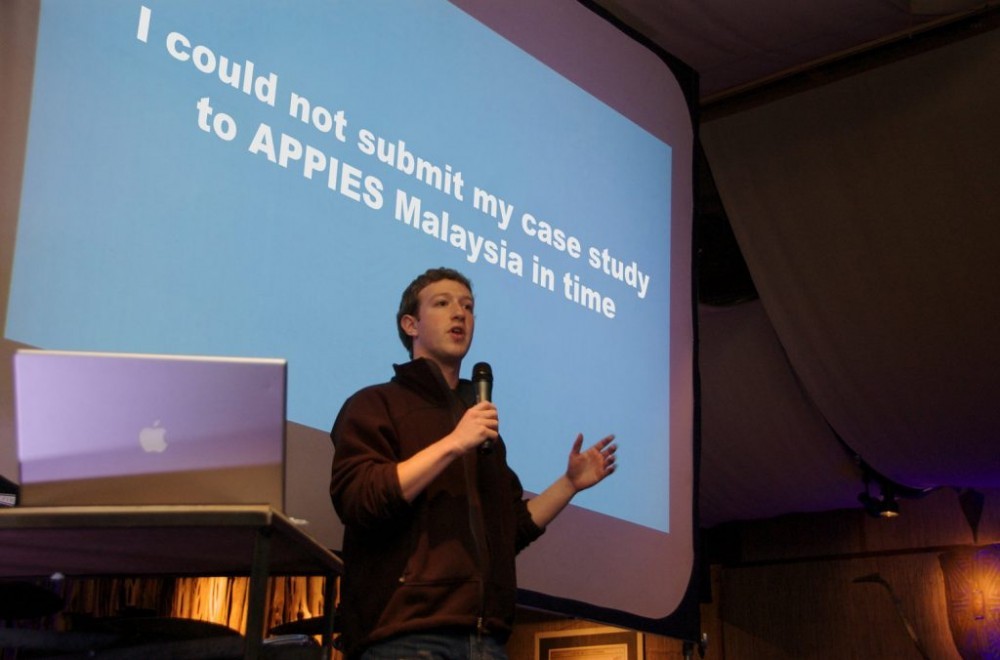 Zuckerbarg hands, mouth and microphone are at the exact same place on this photo and also the shadow on this Apple computer. They are good at photoshop.

The fact that the system is free to join can make you suspect on what the owner has to gain here. If the system works, why the owner is trying to help people free of charge? Unless, your spendings on ads will go to him.

He also says that the ads space is limited to 50, but I tried one thing. I sign up with different email and no matter of with how many emails you sign up, there is still a place for you. This also proves that Digital Payday is one of the most non-sense scams.

It is just made to lure people who would like to make money online and steal their money. It’s so non-sense leading people to believe that they are going to make a lot of money online, practically doing nothing. The site uses fake testimonials and unrealistic income claims. It has all the signs of a scam.

7. Personal information to withdraw your money

In addition to everything mentioned above, they also ask you every kind of personal information to withdraw the money, which makes it even riskier to get involved with their program.

I find it strange because I earn money online and I never had to share that kind of information to withdraw the money. In any case you are not going to make $5,000 in 24 hours as the programs claims.

It is possible to earn money posting ads of companies, however, Digital Payday is created only to take advantage from people like you. They use the fact that most newbies don’t know how the process works.

People who make money with ads join legitimate networks for free and they learn the process of building a successful online business. There are two ways of making money from ads: either you pay for ads space, or create your own ads space on your site.

In case you create your own space on your site, this means that you need to post useful content on your site that people like, so that you can get a lot of traffic to your site and you can expose them to ads. You can also create a YouTube channel and post ads in the middle, before, or along your YouTube videos. But visitors need to first come to your site for your content. Earning money with ads on your site requires a lot of traffic. Ad networks like Google Adsense and Media.net pay you in the form of pay per click.

The payment for a click on an ad from your site is very little. This makes your earnings very little in case you don’t have a lot of traffic on your site. So, there is no way you could be making that much money in just a short period of time. Building a sustainable website traffic takes time and effort.

That’s why I consider the Daily Payday a scam and I would say to avoid it at all costs. Most people fail to make money online because they are mislead by scams like this one.

Fortunately, there is a legitimate way to make money online and that is what I am following.

==> The Program that Successful Online Entrepreneurs Are Using ==>